The modern trend of individualizing a lone ring finger has emerged again with a kick and a whole lot of glitzy, vivid nail art.

I was intrigued by this look when I noticed it on colleagues and realized it works best with an uncomplicated effect. You don’t want it too obnoxious because employing your creative manicure as a glam accessory stands on its own.

I’ve heard this trend is sometimes worn to manifest good luck. Another story is that single women wear it to declare their independence: from obligation, expectations and/or control.

Whether you’re single or not, if you’re a self-ruling woman rocking this chic style, you most certainly stand out, not alone. And all fashionistas know that the next good thing is just around the corner!

To Create This Look: Polish with Enlightenment from Précision. Top with Sheer 24K Sparkle from CND (coming out in July). Ring finger is adorned with a Minx wrap in Golden Scales. 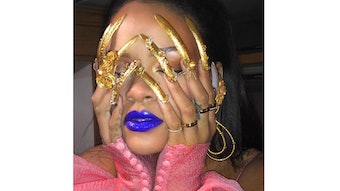 A Look Back at Four of Rihanna's Best Nail Looks

Let's get nostalgic about some of Rihanna's best nail looks in anticipation of her headlining the 2023 Super Bowl halftime show.
Sep 26th, 2022 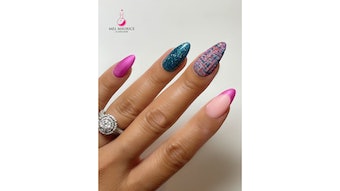