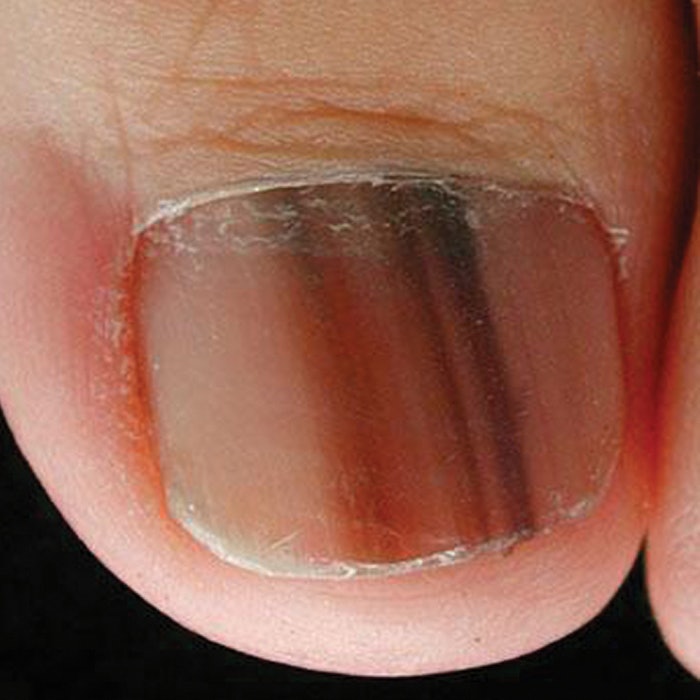 Learning how to spot nail-related malignancies could save a life.

Thanks to widespread public awareness campaigns by organizations like the Skin Cancer Foundation and the American Academy of Dermatology, most people know about the three main forms of skin cancer: basal carcinoma; squamous carcinoma; and the least common, but by far the most serious, melanoma. However, far fewer realize that skin cancer can show up in and around the nails as well, and can be just as dangerous, especially when left undiagnosed for too long.
As a nail professional, you’re in a unique position to not only spot cancers of the nail during a service, but also to help spread the word about this potentially life-threatening disease. “Just as nail techs are on the front lines in spotting nail infections … they’re also on the front lines in the detection of malignancies,” says Chris Adigun, MD, a Chapel Hill, North Carolina-based dermatologist and nail specialist.

Here’s what you need to know to protect your clients, yourself and your loved ones against the threat of nail-related cancers.

When Cells Go Rogue
All forms of skin cancer develop in cells, which, when activated, proliferate, ultimately forming tumors that may appear under the nail plate (ungual), in the nail matrix (subungual) or more generally under or around the nail (periungual). The cells themselves determine the malignancy type: There are basal cells, squamous cells and, in the case of melanoma, melanocytes. When caught in time, nail cancers are usually relatively simple to treat and cure. However, if diagnosis occurs too late and the rogue cells have been allowed become more aggressive and/or spread to lymph nodes or other organs, the prognosis worsens. This is especially true in the case of melanoma, which is expected to cause an estimated 9,320 deaths in the United States in 2018.  Although the physiology of cell proliferation and tumor formation is the same regardless of where cancer appears on the body, their causes vary. Medical science has identified specific genes that contribute to certain cancers but, “Far and away, most skin cancers are caused by ultraviolet (UV) exposure [from the sun],” says Dr. Adigun. Subungual cancers are a key exception, however. “The majority of nail matrix tissue is located underneath the skin, and that area gets zero UV exposure,” she says. “With nail bed melanoma there may be a history of trauma to the nail. We do know that nail melanomas tend to happen more often in people ages 50 and older, and occur most often in the first digits of the hands and feet. We also know that nail melanomas have the same rate of occurrence across all ethnicities.”

The signs and symptoms of nail-related cancers vary depending upon their location. Basal or squamous cell carcinoma often appears as a malformation, nodule or ulcer on or around the nail that doesn’t resolve. Melanoma that begins produces a telltale sign: a band of dark pigment that runs vertically down the nail. This band is a direct result of the melanocytes, which deposit pigment as they proliferate. “People can have bands in their nails for all sorts of reasons—they can be just freckles on the nail,” says Dr. Adigun. “In fact, the lion’s share of these bands are benign, but it’s really hard to make that call if you’re not comfortable with nail anatomy and how to monitor and evaluate this type of pigmentation.” For that reason, nail techs who notice a dark band on the nail should always recommend a visit to the doctor.This symptom received widespread attention recently when a nail technician based in the United Kingdom posted on Facebook that she spotted a band on the fingernail of one of her clients, recognized it as subungual melanoma and urged her to see a doctor immediately. Previous manicurists had told this client that the band was caused by “heredity or a blood blister” and, according to the manicurist, by the time her client sought proper medical attention, the melanoma had already spread to her lymph nodes. Had this client seen her doctor at the first sign of melanoma, she would have received a conclusive diagnosis via biopsy and the confined cancer cells could have been removed and replaced with a skin graft. Once the cancer becomes invasive, “things get more complicated,” says Dr. Adigun. “Many nail techs know nothing about melanomas in the nail and may easily consider the symptom a simple bruise,” reports Janet McCormick, MS, educator, author and co-owner of Nailcare Academy. “They absolutely should know more than they do. I’ve had nail techs say to me, ‘That’s not my job!’ But I disagree; it is their job.”

On the Front Lines

Cancer detection might not have been what you had in mind when you signed up for cosmetology school, but the reality is that in many cases, you’re more familiar with your clients’ hands and feet than they are. They come in for their appointment, their nail enhancement is removed and replaced, and they never really look at their own nails.

“Nail techs play a bigger role in this arena than they think,” says Dr. Adigun. “I can’t tell you how many patients I’ve asked, ‘How long has your nail been like this?’ and they answer, ‘I honestly have no idea, I haven’t seen my nails in so long.’”
McCormick urges techs to take a preventive and proactive approach in order to protect clients. “They must do a consultation before any service and during that time, look for any abnormal conditions,” she says. “Even under a gel or acrylic nail, they’ll still see a melanoma symptom under the free edge as a discoloration, and in the regrowth as a shadow. When that’s the case, they must remove the nail for a better look. It can always be replaced!” McCormick also recommends developing a relationship with a podiatrist and a dermatologist who, like Dr. Adigun, have positive attitudes toward nail techs. “Nail professionals need to be empowered,” affirms Dr. Adigun. “Just as hairstylists are the No. 1 detectors of melanoma on the scalp, nail techs play a key role. They can notice discolorations or a malformed nail that’s not coming together quite right. This is an opportunity for them to refer clients to their dermatologists.”

Are you confident in spotting nail-related malignancies? Let us know in the comments below!

-Linda Kossoff is a health and beauty writer based in Los Angeles.

Knee pain is hardly the first joint health issue that comes to mind for nail artists. Learn how to manage the pain in the salon.
Jun 16th, 2020

Peripheral neuropathy affects an estimated 30 million Americans. Here's what you need to know when servicing a client with the condition.
Dec 13th, 2019

The radiating pain of sciatica calls for prompt diagnosis and treatment.
Nov 8th, 2019
Follow Us
Most Recent