After months of competition, Essie announced the grand prize winner of The Essie’s Nail Art Awards and the brand’s new 2017 Essie Nail Art Ambassador: Los Angeles-based Meagan Knight (@tinybrushes). “Meagan captured my interest early on in the competition because of her simple, colorful nail art,” says Michelle Saunders, Essie celebrity manicurist and judge for this year’s competition. “I was intrigued by her technique and curious about what she was going to create next. Her esthetic was both current and aspirational.”

According to Knight, she draws inspiration for her nail designs from artists of every kind. “I’m inspired by other artists of every medium, not just nails,” she says. “I’ll often see something and think, ‘Oh, this is really cool; I wonder what it would look like with purple instead of pink,’ and that’s how I’ll get started.” The Essie’s also awarded New Jersey-based tech Halle Butler (@hallebnails) as Fan Favorite. For more
on the winners, visit essie.com/theessies 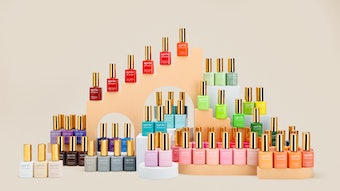 With 100 new shades, your gel manicure clients are bound to find their perfect shade in the new collection from Aprés Nail.
Sep 15th, 2022

CosmoGlo has a curved light that provides customizable workspace lighting.
Aug 29th, 2022
Follow Us
Most Recent