Knee pain is hardly the first joint health issue that comes to mind for nail artists. Learn how to manage the pain in the salon.

When we think of the joint health of a working nail technician, knee pain is hardly the first one that comes to mind. But for those who have previously injured their knees or are predisposed to knee problems, the job can certainly make the pain worse. 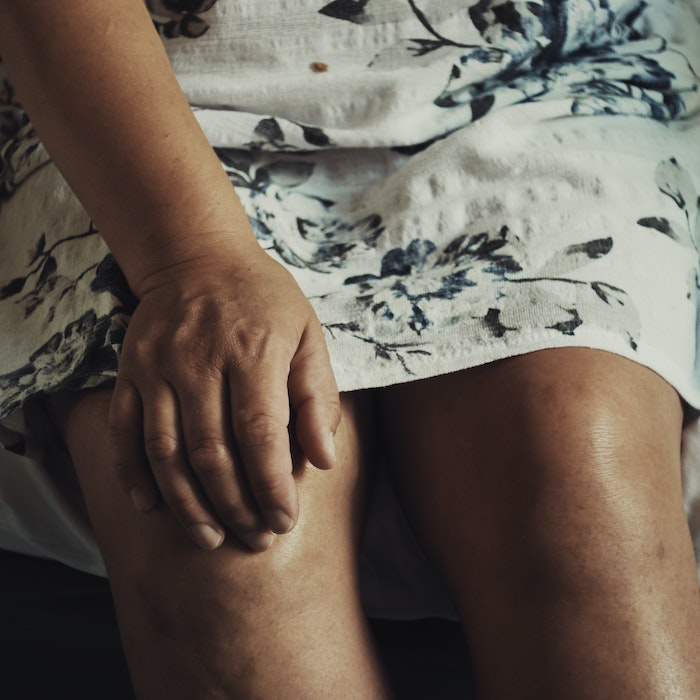 Take nail tech Andrea Ortega, for example, whose knees have been bothering her for the past year. “I’ve had knee pain that comes from not sitting properly for long periods of time,” says Ortega, owner of Luxe’d Nail Lounge in Riverside, California. “When I stand up, it almost feels like my knee is locking up, and it hurts to straighten it. I have to extend my leg very slowly before I can stand back up.”
Sitting for long periods of time with bent knees, like you would at a desk job, on a car trip or at a manicurist’s table, can magnify pain for those who already have problems with their knees, specifically at the front of the knee and around the kneecap. Likewise, the constant squatting required to perform pedicures and standing up from that lowered position is particularly strenuous on knees. Here, we discuss the most common knee- related problems and how you can manage them while continuing to do your job.

The knee joint is one of the easiest to injure. Just twisting your body the wrong way can injure a ligament and result in pain around the knee. Pain might be mild at first, then escalate into a more painful condition. It can be sharp or dull, or the area around your knee might swell or feel warm if the tissues around it are inflamed.

A common source of knee pain in younger women is called patellofemoral pain syndrome, also known as “runner’s knee.” It can feel like a dull aching and often pops up in women between 15 and 35 years old, says Craig Tifford, MD, a Yale Medicine orthopedic surgeon. “The problem usually has to do with the front part of the knee between the backside of the patella (the kneecap) and the front part of the end of the femur, or thigh bone,” Dr. Tifford says. Despite the name, the cause of patellofemoral pain syndrome isn’t necessarily a result of running; in fact, it’s quite a broad term used to describe a series of knee problems. Causes of runner’s knee can include overuse, injury to the knee, flat feet, weak thigh muscles or malalignment of any of the bones from the hips to the ankles. “Symptoms are often exacerbated with repetitive stair climbing, kneeling and squatting,” explains Dr. Tifford. “Someone who has patellofemoral problems may find that an occupation that requires prolonged sitting, such as a nail technician, aggravates their symptoms.”

For some, knee discomfort might stem from getting up more than the squatting or sitting, as in Ortega’s case, says Austin, Texas-based orthopedic surgeon Barbara Bergin, MD. “Standing up from a squat puts tremendous pressure on the knee caps, and women are more prone to developing problems from this,” Dr. Bergin says. Also, be on the lookout for “crunching” under the knee while getting up, she says. That sound could mean that the cartilage under the kneecap is starting to wear out, and it might be time to see a doctor.

Another cause of knee discomfort is knee bursitis. Bursitis is the term for inflammation of a small fluid-filed sac (bursa) near the knee joint. Causes can include injury directly to the knee, but most cases of knee bursitis are a result of friction and irritation in the knee joint that occurs in jobs requiring kneeling for long periods of time on hard surfaces. Most of the knee problems that Dr. Bergin sees, however, are related to osteoarthritis or torn ligaments. Being overweight can speed the development of arthritis, Dr. Bergin says, so instead of developing it in your 60s, you could start to have arthritic symptoms, such as knee pain, around age 40. In addition, sometimes an old injury might reassert itself as post- traumatic arthritis and result in knee pain years later. For those who have a job that puts stress on the knees, it can make it that much worse, Dr. Bergin adds.

For those suffering from gerenal knee pain, the problem usually gets better on its own with time and care for the affected area. To help relieve pain and speed up recovery, rest your knee as much as possible. Avoid doing things that will aggravate the condition, such as squatting, lunging or sitting for long periods of time. Make sure that you stand up regularly to stretch your legs when in the salon.
To help reduce swelling and relieve acute pain, you can apply ice for 20 to 30 minutes every three to four hours, and take an over-the-counter pain reliever, such as ibuprofen, to decrease inflammation. It’s also important to wear supportive shoes, particularly if you have flat feet, Dr Bergin says. The extra support will help keep your knees in proper alignment.

Stretching and strenghtening exercises, particularly for your quadriceps, can help. However, make sure to choose exercises that won’t make knee pain worse. For example, avoid running down hills, which puts a lot of stress on knee joints, and opt for a track rather than pavement. People with knee problems are better off walking or swimming, as running puts a lot of strain on the knees.
If the knee pain is severe, persistent or the result of an injury, such as a torn ligament, then it’s important to see a doctor. Other symptoms of concern are swelling, having trouble straightening your leg, or if your knee buckles or clicks. A doctor’s exam might include an X-ray or MRI to see what’s going on. Depending on the cause, a steroid shot or a visit to a physical therapist might be recommended. In severe cases, surgery may be required.

While working in the salon can put undue stress on your knees, there are things you can do to help. Make sure that you take the time to stretch and move around to avoid long periods of sitting. “Try to straighten your legs when you can, and keep your legs spread wide, as opposed to angled in like you’re knock-kneed,” says Dr. Bergin. Before standing, make sure that your knees are straight and aligned with your shoulders and hips, rather than getting up from a twisted position. And try bending and straightening your legs a few times before getting up.

This story first appeared in the May/June issue of NAILPRO. To receive the magazine, click here to subscribe.

With the ease of lacquer and the strength of acrylic, The GelBottle’s (TGB) revolutionary builder gel, BIAB™, looks and feels like your own natural nails, while giving you the strength that you desire. Read more below and enter to win!
Dec 28th, 2020

Peripheral neuropathy affects an estimated 30 million Americans. Here's what you need to know when servicing a client with the condition.
Dec 13th, 2019

Tips and Tricks for Mastering the Art of Acrylics

Meet the New NAILPRO Advisory Board