Nail Anatomy: A Professional Primer on the Parts of the Nail

Basic nail anatomy is a must for working techs. Learn the essential parts of the nail, from base to tip and everything in between. 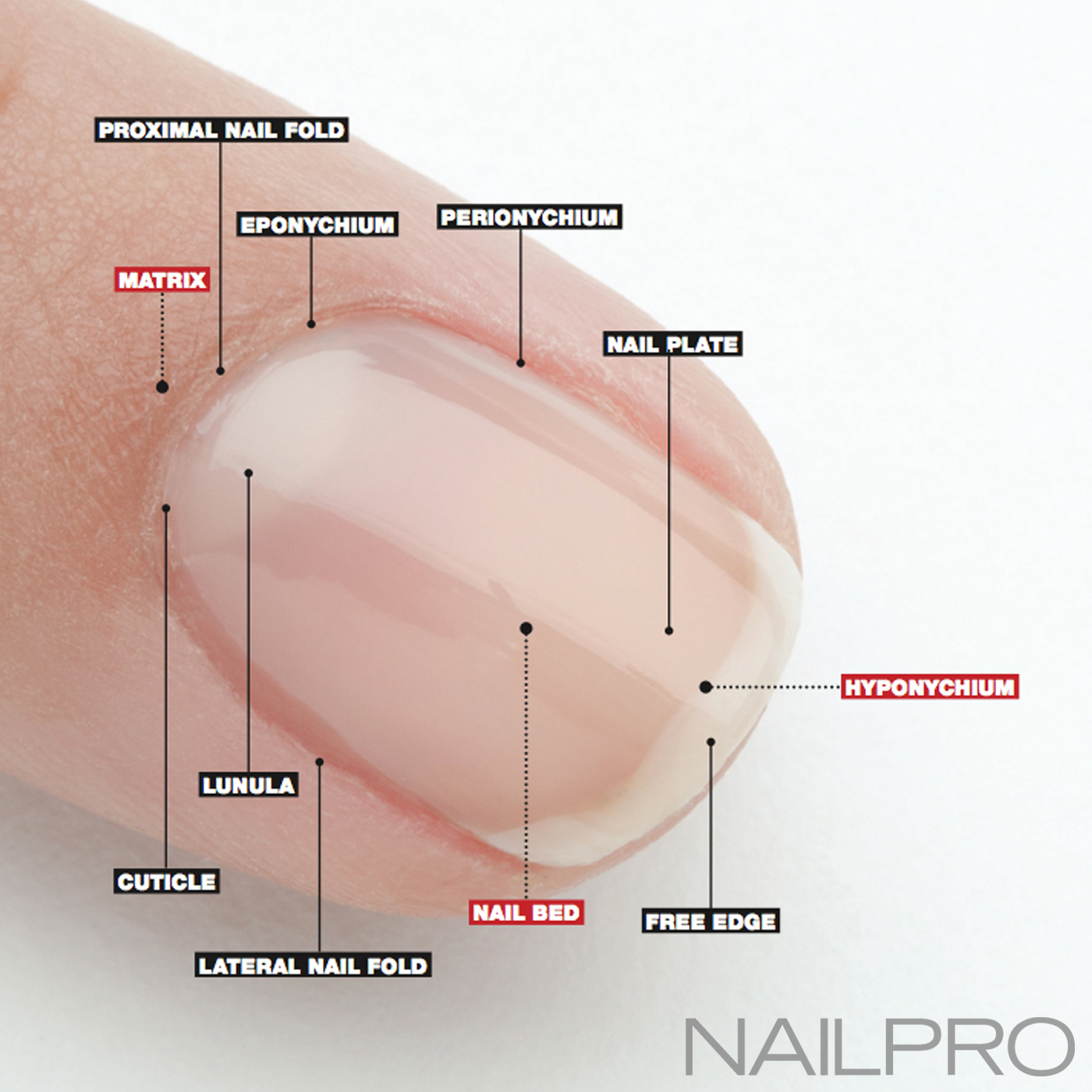 Basic nail anatomy is one of the first things you learn in school and a big focus of your state board exam. Yet, techs often find themselves communicating with clients using the words clients say, even if those terms aren’t technically correct. For instance, many techs incorrectly refer to the eponychium as the cuticle because it’s what clients are familiar with. As a professional, it’s critical that laymen’s language doesn’t replace your credentialed knowledge of a nail’s anatomical parts. Here, a refresher on the essential parts of the nail, from base to tip and everything in between.

Located beneath the skin at the nail’s base, the matrix contains nerves and blood and lymph vessels that produce nail cells. The new cells flatten and are pushed forward toward the fingertip resulting in nail growth. Damage to this important and sensitive area can result in nail plate irregularities, which can sometimes be irreversible, warns Janet McCormick, co-owner of NailCare Academy in Fort Myers, Florida. Be sure to avoid excessive pressure when pushing back the cuticle and aggressive use of hand or e-files when working in this area.

The lunula, or the whitish “small moon” at the base of the nail, gets its color from the nuclei of living nail cells transitioning from the matrix. As the nail grows, those cells lose viability and the nuclei disintegrate, making the nail transparent. A common myth is that an obvious lunula signals a healthy nail. But, in fact, a client’s genetics is mostly responsible for the lunula’s appearance.

The word proximal means situated near the point of origin or attachment—which in nail anatomy is the matrix. To that end, the proximal nail fold is a fold of skin that forms a protective barrier to keep bacteria and infection from reaching the matrix.

The eponychium is the visible “lip” of the proximal nail fold. It forms a seal with the nail plate, protecting the matrix from harmful bacteria. Many people mistakenly refer to the eponychium as the cuticle, which is why the adage, ‘Never cut the cuticle!’ is common, although technically incorrect. Indeed, the eponychium is living skin and should never be cut. Instead, moisturize, then very gently push the eponychium back for an even, symmetrical appearance and encourage clients to keep the skin surrounding the nail consistently hydrated between appointments.

The cuticle is the layer of translucent skin that is shed from the underside of the proximal nail fold as the nail grows. This skin emerges from beneath the eponychium attached to the nail plate. Since this tissue is dead, most of it can be safely cut or filed off—and, in fact, you should! Doing so will improve adhesion of polish and enhancements.

The nail plate is the hard, keratin coating on the fingertip. For techs, this is where the magic happens—be it lacquer, gel polish or a set of sculpted tips. Removing the shine from the nail plate is a common step in many nail services, but it’s important to stop there! The nail plate can become thin, weak and sensitive when layers are removed by filing or improper enhancement removal.

The perionychium is the skin surrounding the nail and it’s frequently a problem area. “It’s prone to hangnails and it’s where most clients will pick or bite which can lead to infection,” says Los Angeles-based celebrity nail tech Michelle Saunders. She encourages clients to always keep the area moisturized because dehydration can lead to further hangnails and painful splintering.

The hyponychium is the skin that forms the seal between the nail plate and the nail bed where the free edge begins. This area is very vascular and sensitive, so avoid aggressively cleaning under the free edge with implements. Not only is this painful and will bleed a lot if the skin is cut, but damaging the hyponychium can cause onycholysis, or the lifting of the nail plate from the nail bed, leaving the area susceptible to infections and fungus, says McCormick.

Sometimes called the distal edge because its situated furthest from the nail’s origin, the free edge is the growth of the nail beyond the fingertip.

What part of the nail do you find the most challenging to pronounce? Tell us in the comments, below.

This article was first published in the May 2017 issue of NAILPRO. 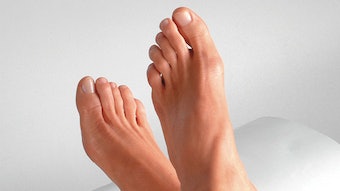 Here, we take a look at flat feet, also called pes planus or fallen arches, and what you can do to help.
Sep 11th, 2020

The GelBottle challenging the status quo in the beauty industry with their Nu Nudes collection.
Jan 22nd, 2021

Knee pain is hardly the first joint health issue that comes to mind for nail artists. Learn how to manage the pain in the salon.
Jun 16th, 2020

Percival sees her celebrity clients in the privacy of their homes, hotel rooms or offices, where she provides customized Reiki manicures and pedicures.
Feb 6th, 2020
Follow Us
Most Recent